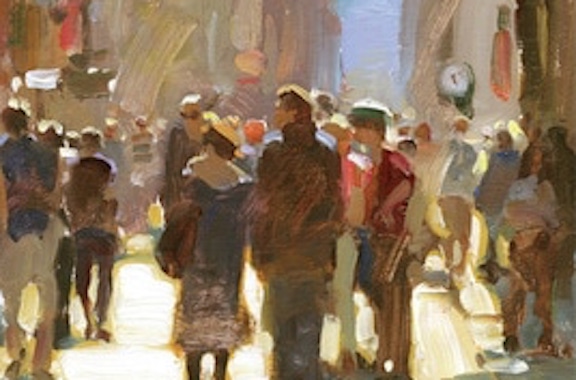 Doesn’t it seem like our nation used to have a true moral compass? That the gathered mass of our people had a more common sense of purpose and destiny? The nation had fewer laws, but it brought individual values into political and business decisions — the quiet web of morals and manners that guaranteed almost everyone a place in our social construct. Ideals of personal conduct helped guide our decisions and the issues that we cared about.  It was less a religious morality than it was a felt citizen responsibility and empathy with others.

Could that consensus national destiny be wrong?  Of course! It endorsed certain brands of racism, sexism, labor exploitation, and imperialist wars — but it should not be forgotten that that consensus also included citizen rights to protests that brought — and is still bringing — some of the worst abuses to heel. This sense of moral engagement was part of our character as a nation, passed on parent to child, village to family, political leader to citizen. It was a desire to live lives our children would be proud of, build the common community, lift up the downtrodden, guarantee the greatest possible individual freedom, access to opportunity and “pursuit of happiness.” So today’s question is this: “Is that now a bygone era?”

Has any more inspiring and aspirational language ever been expressed than the simple statement in the Declaration of Independence: “All Men Are Created Equal?” That cry has now rung out across centuries and around the globe, has brought down governments, elevated new governments. It has, as they say, aged well. It is that shared sense of common humanity that first crystallized in our national character a sense of morality, fair play, and equality before the law.

It was about the rights and responsibilities of man, and the high expectations the founders had of its citizenry. These five words were an outspoken condemnation of the tyranny of kings and the assumed right of despots to override our moral choices. It put into language human aspirations that far exceeded the limited “rights” contemplated by the politics of the day… which endorsed slavery, misogyny, super rights of property ownership, etc.

Radical Centrism is based on the old-fashioned idea that true morality is seldom forced from outside, but given from inside.

But how hard it has been for us here in the U.S. to perfect this concept!  How men/ women can be venal, grasping, ignorant, short-sighted, is a common trope, and many are the national examples of falling away from these ideals. America has found that, even though we are the source of inspiring language, we may not be much better at achieving it than many other peoples. But still… that glorious beginning has had its effect in inspiring moral actions in the United States since the beginning… It is through these that I consider myself a true-blue patriot, and discover a self-renewing source of love for our nation.

Well, liberals got uncomfortable talking about “morals,” as dangerously close a religious way of approaching the world (they share the fear of the founders of the US sponsoring a “state religion”). The sad side effect was that government became the de facto enforcer of “goodness” through regulation and lawsuits. Great for the lawyers and bureaucrats — but a loser for personal responsibility and participation. They seem to have forgotten that the founding fathers actually could embrace both together: they were almost all what were called freethinkers, who believed in science, rights of man, individual freedom, but also typically professed a hazy spiritual quality that they called Deism and an accompanying moral code. Today, liberal talking points are more about the material standing of citizens, and controlling the bad actors than they are about personal responsibility and moral decision-making. What we each “should” do kind of got obscure.

On the right, morality got converted into the prosperity gospel and Reagan’s (and Ayn Rand’s) philosophy of “You’re doing your part if you just gather as much money as you can.” That’s great for the already rich, but it rather amounted to constriction of morality to amassing material wealth. This concept represented another spur to the breakdown in individual pursuit of morality generally. On the religious right, there was a resurgence, as well, of old testament terrorism: punishment of sin, sex, and personal failures — which, if these believers were to check against their professed religion, was almost exactly the opposite of the gospel of Christ.

Lurking just behind this urge from left and right to legislate a “public morality” is the hidden urge for power and control over the lives of others — unfortunately never far from any human behavior. As they codify their morals into laws, these moralists also become concerned with retaining their power over people’s lives and their position as dictators of its particulars. Self-righteousness is disguised as righteousness. Fear of the “other” begins to masquerade as public safety. Salem Witch trials would have played well in some churches or even in the sexual assault accusations in today’s press. And that same self-righteousness has now frighteningly, been converted into a distorted automatic party loyalty that blindly associates “evil” with a strict party affiliation!

So where is the light in this darkness of deformed morality? Radical Centrism is based on the old-fashioned idea that true morality is seldom forced from outside, but given from inside. It’s about the struggle for each citizen/human to get outside of their own interests and invest in the common good. It is a citizen responsibility. Codes of laws that need police or regulatory enforcement are important to some degree, but there is always the danger of cutting short this citizen-responsibility process. Such regulation amounts to a cudgel, not a nudge and should only be a last resort. Societies are beneficial to their citizens to the extent they combine a shared citizen obligation to personal morality and responsibility within a construct of laws that are guardrails against practices that are abusive or corrupt.

OK. Yes, we can all see the weakness in this rather Pollyanna view of political life, but please indulge the concept while we try to reckon what can be gained if every citizen is trusted first to try to get it right.

So how does a citizen get a foothold for living morally in this conversation that seems to focus predominantly on material wealth, punishment of evil, and political affiliation? How does a citizen become part and partner of a larger community? How does one love and respect even those one does not agree with?  Well, that’s the hard part.  Also the part that requires honest engagement. From global corporate leaders to the poor living in the streets, perhaps its time to take stock of how each of us may live a life of meaningful participation outside our own material world, in the communities that nurture, sustain and support our most proud moments of humanity.

The above post is frankly launched into the air as a question with no particular answer. In light of the challenges our democracy is facing in 2017, whether we engage, and how we answer may be an important factor for the future of “us” as a nation.

So today’s question is “Has morality been made irrelevant in today’s world? Where can it be found or how can it be recovered?” You talk.