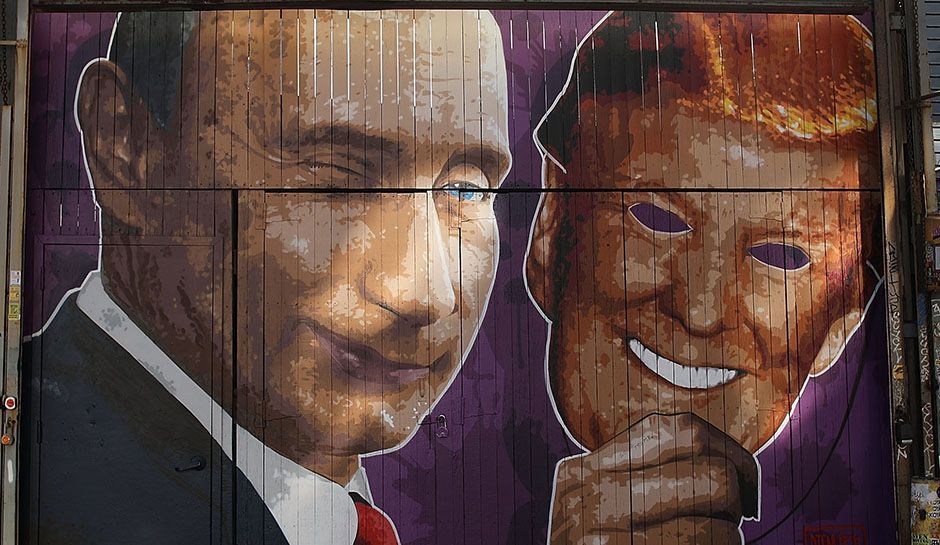 Friends, Romans, Countrymen! I come not to trash Vladimir Putin but to thank him!

It appears that his main purpose in interfering with our 2016 elections (and activities since), was not primarily to create policy, or even to elect a sympathetic President, but to expose and exacerbate the fault lines in our democracy, in order to destroy us from within. Because of his intelligent analysis as an sworn enemy, and his hyper awareness of how democracies have historically self-immolated, he developed a simple attack that has been effective at undermining our country’s faith in itself and its institutions. That we continue to fight and demonize one another, rather than turning a unified national face to fight Putin’s meddling is a tribute to its success.

Effectively, the war of Comrade Putin has been a stress test of all elements our social and political fabric… and boy, do we have a lot of work to do!

To a cagey veteran like Putin, America’s vulnerability at this particular point in its history to an intense viral propaganda war must have been obvious. And propaganda expertise was one of the baseline Russian weapons perfected over a century, since the advent of communism. For goodness sake, the Russian response to the Putin kleptocracy was to virtually elevate him the height of popular acclaim and grant him the powers of a new Czar!

Couple the propaganda success in the U.S. with even a loose-affinity asset (Trump) cultivated over years who could parrot and legitimize it with the skill of a reality show producer. At some point, it must have dawned on Putin that the “peripheral” asset, with a little luck, might be made President — turning a successful fracturing of American politics into a constitutional crisis. He might have stumbled on a lucky combination that would let loose the forces necessary to accelerate the self-destruction of his most powerful enemy!!!

Effectively, the war of Comrade Putin has been a stress test of all elements our social and political fabric… and boy, do we have a lot of work to do! And the problem is, this is not a one-time thing: Putin is developing and testing many more weapons for this kind of warfare, and we’ll continue to experience it. We owe it to our country to close ranks and stop up the holes in our politics and culture that have allowed intrusion of a foreign army bent on destruction.

We may be way behind the curve! But a dark hour, is not necessarily hopeless. For instance, when mechanized, mobile military strikes were made possible by advancing technologies, the Nazi war machine — early adopters — quickly trampled over all of Europe. But patient resistance of leaders and citizens, assembly of a competitive war machine and strategic thinkers that could match the lightning strikes of the Wehrmacht, eventually turned the tide of the war.  I consider that within this analogy, we are about at 1939, when Germany invaded Poland!

So we have a ways to go to be prepared to defend ourselves. The main thing we have to do right now is to stop being Neville Chamberlain equivocators, like so many in today’s Republican party, and start being John McCain/Churchill-aware of the evil intentions of our enemy and the stakes for Western Civilization, particularly its democratic republics.

So what has been revealed about the flaws in our social and political systems? More important, what kind of tools must we, as a country, and as individual citizens develop to resist this invasion?

First reveal was that we have been for years in an isolation chamber, unaware of the new warfare that our technology had unleashed upon the world. The World Wide Web effectively ended the geographical protection from external attacks that the U.S. enjoyed for a few hundred years. Precision drone strikes in Iraq are directed from a bunker in the U.S.; home-grown jihadists recruited through web video (not immigration) are a main catalyst of US terror attacks; revolutions organize and sustain on Facebook throughout the world; this is powerful weaponry. So is it any wonder that a real army of Russian hackers holed up in the GRU Building in Moscow, developed and camouflaged memes and bots to virally invade and attack information and communication systems in the U.S. — using our own citizens and press as weapons?

The second reveal was that Americans, bless them, still appear to be easy marks in every con game, (as DeToqueville noted in his 18th Century essays about the new American Republic) — when they are not busy swindling others. Being suckers for “private” information, conspiracy theories, and other “special knowledge” cons  — in combination with the rapid viral spread of information enabled by the internet — has made a subset of Americans easy prey for cunning propaganda and cult-like leaders. They willingly serve in the army of our enemy — validating weaponized false information and pre-fabricated “news” by passing it on automatically, simply based on their “agreement” with its sentiment.

A third part of this is that those who willingly immerse themselves in a groupthink bubble, are easily inoculated against receiving any information that might challenge their world view. Skilled propaganda manipulators can train an irrational hatred through a Pavlovian “hate/fear” response to certain words (like Hillary Clinton, liberal, global, immigrants, socialism). The psychology of this response simply shuts down thoughtful consideration of facts, and rouses a blind hatred in this unwitting army.

And finally, hyper partisanship kills democracies. A little help from a malicious source can greatly magnify its capacity destroy the customs and norms of a functional government, replace verifiable facts with confusion, rule of law with autocracy, — all of which further erode the citizenry’s confidence in their government’s ability to solve problems.

So what can we do, specifically to end this renewing cycle of fake news, cynicism, hatred, institutional breakdown, and yet more partisanship?  Here are my suggestions… to start the conversation.

The Nation: Stop it.  Stop the partisan bickering. This is a war we must fight together! Stop to consider other points. Stop to recognize the common humanity and shared interest of your opponent. Stop trying to “win.” Stop forgetting what’s good and reasonable about those on the “other side” of the political divide.

Political Leaders, Congress, the President: We have lost trust, comity, custom, and legislative manners. We forgot they were critical to a functioning government. Both parties must make sacrifices with conscious efforts to rebuild them. This will be hard. End the Hastert rule and other party customs that increase the power of the extremes (and lessen the power of the reasonable). Both parties must insist on bipartisanship to solve problems: compromise and legislate for enduring change. Don’t let powerful outside interests drive a stake through negotiated bipartisanship. Don’t “message” every issue with “talking points” designed to cement the most hysterical fears of your “base” and demonize even the mildest of your opponents. Recognize this is an actual war, with an actual foreign enemy, and that unity in resisting defeat is critical, not incidental.

The Press. Publishers: Please! Stop covering every Trump story. He’s great entertainment, yes, but nowhere near the whole story. Your slack jawed repetition of every jackass remark and outrageous “Trump Show” episode was what made him seem to walk on water for his base, to begin with. So, reserve at least half of each broadcast or story for fact-finding on a policy issue. Work on making unfounded certainty comical in any quarter, and thoughtful uncertainty and openness entertaining. Hard work. Stop trying to be kingmakers or policy-makers; please; restrain yourselves. Get real panelists, not straw dogs. Stop feeding “red meat” to the most hyper partisan of your viewership. Convene normal citizens to hack things out together. Broadcast rationality, friendship, problem-solving; not hysteria and insults. And citizens, resist the impulse to turn on the TV for a scripted political Reality Show as news. Turn it off, or over to more boring news shows.

Social Media: Admit you are the new media. You are not just a “platform.” Stop hoping you can develop “algorithms,” to address every form of human deception and communication without a human conscience. Hire a BUNCH more people to police and understand how you are being used. Develop ways short of censorship of alerting consumers to the originating factory and possible motives of the creators of content, and a measure for its adherence to a known body of fact. Try not to impinge on free speech, while providing some mediating role to help consumers sift information. You won’t get it right on the first try, so keep trying!

Entertainment media: Narrative is the most powerful mind influencer ever. So when you are telling stories, please be mindful that focusing only on the corruption of politicians and political processes, about the sell-out of compromising, you are actually engaged in undermining the politics of our nation. Stop making government a convenient enemy, just because it makes a good story.

Regular citizens: The grassroots is where the conversation will change, and resistance to the Russian invasion will develop. But only if we learn to: identify when we are being manipulated and resist and, a corollary: learn how to speak respectfully to other citizens — who are in the foxhole with us.  Be suspicious of pre-fab memes and mic-drop put downs. They might come in an attractive confirmation-bias wrapper, but the actual “candy” has a wholly different intent — to poison every democratic transaction. They are meant to divide us, so we can be conquered. Learn manners on Social Media: pretend you are discussing with actual people, not cardboard cutouts of your enemies. Don’t avoid politics. Find ways to get together with your neighbors and to discuss politics and solutions respectfully. Be kind to each other.

As England found in the darkest days of World War II, it all comes back to the resiliency, honor and mutual support of the citizenry. And eventually, this war with Comrade Putin will be won, not by any of the institutions I have called out above, but by you, in your neighborhood, in the grocery, at little league games, spreading the urgent news of vigilance, common cause and resiliency among all citizens, as we face down a real existential threat to all we hold dear. So we can finally say “Dasvidaniya, Comrade Putin..”

And THEN, like good Americans… we can get back to fighting each other like cats and dogs!!!

By the way, I have taken to collecting news articles in special curated magazines on the Flipboard program. These are facts and opinions that interest me and which provide some of the statistical rationale (and narrative logic) for the concerns that interest me. It’s fun, and I hope you find it informative to supplement your reading.

Metadada ‘Pocalypse Review is a catch-all magazine and media repository for articles I am writing or have written or support/disagree with my trains of thought.
OK, It’s the Trump Show is my surrender to Trump, Trump Trump all the time. A collection of articles specifically about our current President.
Radical Centrism Review is my search to recover a dynamic center to our politics
Culture: Wars and Pieces is relating books, movies, music and art to the current state of our social and political structure.
Let me know what you think!